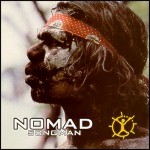 With the release of Songman, Andrián Pertout speaks to multi-
instrumentalist Adam Plack from New York about the Aboriginal grooves of the Nomad project.

Sultry grooves, entrancing tribal beats and snake-charming didgeridoo laced with exotic chants of Aboriginal Dreamtime, states the promo to the long awaited follow-up to Nomads ARIA nominated self-titled debut of 1995.  Songman is the latest offering from New York based multi-instrumentalist and vocalist Adam Plack, and highlights a collaboration with the songmen of the Ramingining community in Arnhem Land, namely Bobby Bunnungurr, David Gulpilil and Jimmy Jidamin.  After experiencing an inspirational performance at Melbourne University of the David Gulpilil Dance Troupe back in 1996, ex-Melbournite Adam Plack went on to establish the relationship with the Ramingining community that would later deliver the material for Songman.  A unique happening, because rather than simply being an artistic encounter, it marks a true intercultural exchange.  Other Nomad projects include the 1998 soundtrack to Deepak Chopras A Gift of Love, a translation of a book of poems from the thirteenth century Persian mystic/poet Jalaleddidin Rum, which included the participation of Demi Moore, Deborah Winger, Martin Sheen, Goldie Hawn and Madonna, among many.

What was the initial inspiration behind your decision to adopt the Aboriginal didgeridoo as an instrument of choice?

AP: One of the first albums I made was called Winds of Warning.  And at the time I had a studio in my bedroom, in a house that I was sharing with three or four artists in Camberwell (a southern suburb of Melbourne).  And I was writing all these songs, and I just couldnt finish them.  And at the time Id been listening to all this different fusion music  one thing that jumps out was a track that Peter Gabriel did with Youssou N'Dour  and I loved the way that the two worlds came together.  You know, with such a beautiful kind of bridge.  And I think something started ticking in the back of my mind, and instinctively I picked up a cardboard tube and started blowing in it, and I was like, Geez, this is pretty cool!  So I took it to the next step pretty quickly.  I found someone in St Kilda esplanade that was selling didges, and got myself one, and actually became really good mates with him.  His name is John Soimes, and I did the album Winds of Warning with him.  And John and I started going out into the bush and just imitating nature, and thats pretty much how it started.  It was just a natural attraction to a: the didge, the musical instrument, and b: tapping into the landscape was a really exciting teacher.

All my teachers in music have been classical.  I grew up learning violin, piano and guitar; my family was all classical orientated.  But I wasnt really that into the sort of intellectual side of music as much as the soulful side.  I really enjoyed the sense of freedom that I had with the didgeridoo, because it wasnt a cultural instrument that Id grown up with, so I wasnt bound by the culture.  And so it happened pretty quickly.  I started recording, playing the didge along with tracks Id been writing at the time, and the best way to describe it is that it was like the hub in the wheel musically  it enabled me to create these journeys of music that started to bring in Australianism musically into my music.  And I started writing Australian world music back then, eight or nine years ago.  Anyway, thats how it started, and I think the contact and exchange Ive had musically with Aboriginal people has been a bi-product of the interest in the landscape  the years doing this mucking around and learning how to imitate wildlife, and then putting that into a more musical context.  That kind of gave me the grounding to have a common interest when I started working with people like David Gulpilil and Bobby Bunnungurr on the Nomad project.

Tell me about your latest collaboration with the songmen of Ramingining.  How did the project come about?

AP: Well, I did the last Nomad project in 95, and that raised my profile around the world quite a bit.  And I then saw David Gulpilils Dance Troupe performing at Melbourne Uni, and was completely overwhelmed by how powerful they were.  And I didnt quite feel spiritually ready to approach them at the time, but I knew I really wanted to work with them, and hoped that I would.  And probably a year or so after that, after Nomad, David then knew what my work was like, he liked it, and I rang him.   I tracked him down up in Ramingining on a CB radio from New York, and we talked about working together.  I told him Id seen his show, that it had brought me to tears, that I wanted to go further than the didgeridoo, that I wanted to investigate tribal song and work with songmen, and that if he was interested, I was open.  And he said, Sure, come up.  The best thing to do it is to come and live with us for a while, and well write together.  So thats what we did.

What kinds of methods did you have to employ in order to compose music with this Aboriginal community of Arnhem Land?

AP: Youve got to be completely independent, so everything was battery operated.  I had DAT, I had a workstation  an ASR-10 Ensoniq thing which I dont use a lot anymore, but back then was actually perfect, because I had the keyboard and a lot of samples that Id put together myself before going into the community.  And basically the process was that once Id gone into the community, met the elders, got the approval to work there, the word went around.  And the first few days we kind of just kicked back and waited to see what would come out, as far as some of the songmen bringing songs to a little makeshift studio wed set up.  And after about three days, three or four different songmen were brought in to introduce themselves, through Bobby, who was the leading songman in Davids dance group.  And theyd come in, sing onto the DAT, and then Id say, Hang around, Im going to do something with the track.  This is the kind of thing that were going to do with the album.  Id sample about a minutes worth of the vocal chant into the keyboard, start adding some drum loops, and basically sketch up a track.  You know, a bass line, a pad and riffs.  And then play it back to them, and say, What do you reckon?  Do you like the direction?  Tell us about the song.  You know, kind of get the full story of the song.

So they got a pretty good indication of where the whole thing was going.  It wasnt really just like you sampling a few things and coming back with a dance track.

AP: No, because I didnt want to do any more sampling, I wanted to work with people, and get the experience into the music, get the lifestyle and the community, as far as their side of bringing their culture to the project, straight out of the bush.  And I also wanted them to know what I did and how I did it as much as I could.  So that was a really successful way to do it.  I think I just got lucky, because I thought it through but didnt really know how things would work out, you never do.

And how has the community reacted to the end product?

AP: They were rapped.  I reckon before I left nearly everybody in the community had a copy on tape.  I made a tape for the first fellow, and then his family would come in and say, Give me a copy of Jimis song, we really like it with the drums and everything.  And that just became a ritual the day after I recorded a song with someone.  Id spend most of the day just dubbing tracks for different families to listen to, which gave me confidence and the assurance that I was doing something that the community was into.  So by the time we left, everyone knew us, and we were treated really well.

What was the motivation for the community to become involved in this project?  Was it something they wanted to do?

AP: Yeah definitely, everyone up there is musical.  A lot of people growing up in western cultures are into music, but are a bit shy to express themselves.  And in these communities where everyone just share everything, music is not broken away from everyday life.  Its very second nature, and I think that there are so few opportunities for people to spend so much time singing and dancing, to put stuff on an album, to be creative and try new things.  I think that the common ground for David and I was that we were both into breaking down stereotypes, we both wanted to do something magical and take it out of the traditional context.  So he wanted me to play didgeridoo, he wanted the white fellow to play didge.  And he wanted to give me good material, and material that could be used with these modern kind of New York grooves.

What have been some of the opportunities arising from your recent association with Deepak Chopras release of A Gift of Love?

AP: More opportunity.  You know, David said to me, Youre the first white fellow thats come to our community and said lets do something together and you can do anything you want to do.  He said, Usually theres anthropologists coming down here and just questioning us about our language, or our ritual, but theres no exchange.  And I think that he was really excited about the exchange.  And I think New York for me is the same thing, its an opportunity to grow as a musician and as a human being.  I think I really needed that, because I didnt know much about the business and production, compared to what I know now, and the Deepak Chopra album you just mentioned got me working with a lot of different people.  All of whom are artists at a very kind of high level, and just getting to work with them and producing that album really gave me the opportunity to learn and see how hard people work, and what methods they use to get themselves into a creative framework.  And of course having those names associated always helps.  But to me, I see New York as sort of like the Olympics, thats where I get to compete with people, not at a musical level, but at a personal growth sort of level.  And its very hard for me to separate my personal growth in life from my music, because theyre like two hands holding each other.

What are you up to in the upcoming future?

AP: Right now Ive got my hands full.  Ive got this dance remix of With You taking off here, which is the first single off Songman.  I just got told yesterday that its now number twelve on the Billboard dance charts, climbing up towards the top pretty quick.  So people have been ringing me up and booking clubs gigs.  And so every weekend Im doing a few club gigs around New York.

All rights reserved. All text, graphics and sound files on this page are copyrighted.
Unauthorized reproduction and copying of this page is prohibited by law. Copyright © 2000 by Andrián Pertout.