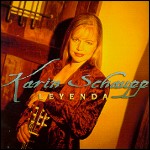 With a new album out and an upcoming tour of Australia, Andrián Pertout speaks with guitar virtuoso Karin Schaupp about classical Spanish music in the 90s.

Karin Schaupp is a German-born classical guitarist, and initiated her performing career at the early age of six.  The musical awakening that had only just made the physical connection that previous year, went on to hastily establish for her a reputation as an emotive and virtuosic soloist.  In 1992, receiving notable recognition with The Best Interpretation of Spanish Music award in Madrid.  She has since presented many celebrated recitals throughout Australia, Europe and Asia, and is today a phenomenon that will only continue to evolve in the years to come.  Leyenda is the follow-up to her debut solo album Soliloquy and features the Spanish and South American sounds of the music of Isaac Albeniz, Agustin Barrios, Enrique Granados, Joaquin Rodrigo, Regino Sainz de la Maza, Astor Piazzolla, Sebastián de Yradier, Heitor Villa-Lobos, Andrew York and Nikita Koshkin.  The album was recorded in the Nickson Room at the University of Queensland, and was produced by Karin and Isolde Schaupp, featuring a 97 cedar-top guitar custom-made by Simon Marty.

How did your musical genesis come about?

KS: I guess its because I heard guitar music, probably before the time I was born, because my mother was a guitarist.  And she also had a lot of students, she was doing a lot of teaching, so I was always surrounded by guitar music in our home, for as long as I can remember.  And I always wanted to be a part of that, I wanted to be able to play, I just loved the gentle and sweet sound of the guitar.

After almost two decades of performing experience, what is your opinion on the art of performance?  Do you base the success of your recitals on their emotional qualities or purely on technical grounds?

KS: Oh no, its definitely the emotion, I think communication with an audience is by far the most important factor.  I think the technique is like your toolbox, its very necessary, and you cant create without your toolbox, but it is only your toolbox.  I think the best technique is the technique that you dont notice (laughs).  And the most important thing about playing is sharing the music with people, and the communication and the expression in a performance, rather than the applause and the accolades.  So thats important to me, that that comes across.

Tell me about your new album Leyenda.  How does the basic philosophy differ from that of your previous release Soliloquy?

KS: I guess its genres are more mainstream than Soliloquy.  It has a real focus on Spanish and South American music.  Soliloquy was perhaps a little more esoteric, in the sense that it had more contemporary music.  I really focused on collecting pieces that were rarely recorded, and in fact a couple that were world premieres.  Ive done that to a certain extent in this album, but with a more mainstream repertoire.

How would you describe your approach to the interpretation of Spanish music?

KS: Oh (laughs).  OK, I think Spanish music is very passionate, so I think passion is very important, and a lot of it is very romantic.  You know, pieces like Granada serenade and Dedicatoria, another piece by Granados, I think theyre very romantic, so I think that the lyrical element is very important.  And just like any other music, every note has to make sense, and the tone colours, just making full use of the palette that the guitar has to offer.  I also think another important thing about interpreting pieces is that you make them your own, and that each style has its own language, but in a certain way you also put a little bit of yourself into the mixture.  And by that I dont mean that you play every style in the same way, that would be very boring (laughs), but certainly with respect to the style but also with respect to your personality, so that you can make the piece your own, and make it a work of art.

What is the essence of Spanish guitar technique?

In a previous interview you expressed your views on the disadvantages of elitist attitudes in classical music.  How would you like to see this genre increase its limited audience?

KS: I think it has a lot to do with partly how its presented to people, but also there is a certain stigma attached that says you have to understand a lot about classical music, and learn a lot about it before you can appreciate it, and I dont think thats really the case.  And sometimes it happens to me that people say, Oh, is that classical guitar youre playing?  I didnt realize that was classical.  Oh, I really liked that!  So yeah, one of my main aims is to bring it to a wider audience, and its great when more people can enjoy the music.

What are some of your aspirations for the future?

KS: Just to do more of the same, and to be the best guitarist I can possibly be.  I think thats all you can ever aim for (laughs).  And yeah, just to continue to make recordings that Im happy with, that Im proud of, and to play all over the world.

Tell me about some of the upcoming events.

KS: Im doing a tour throughout Australia, its starting in Sydney on the 30th of May, and then basically throughout all of Australia in June.  Im going to Germany in July and August for a guitar festival and concerts over there.  I come back and finish the tour here, and then Im off to America and Canada for the first time.  So Ive got a very busy rest of the year ahead of me.

The guitar was built in mid 97 by Simon Marty, and features a western red cedar soundboard, Brazilian rosewood back and sides, a mahogany neck, and an ebony fingerboard.  The soundboard is constructed to my own design, says Marty, And like all my guitars, Karins is very loud for a classical guitar, but the loudness doesnt compromise other qualities such as balance, tone and clarity.  Other prominent guitar players that use Simon Marty guitars include Slava Grigoryan and Gareth Koch.