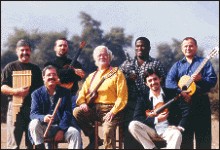 Inti-Illimani, which literary means sun mountain in the Ayamara dialect of Bolivia, have a history that spans over three decades, and a status within the Latin American folk movement that is truly legendary.  Our own John Williams, who has previously collaborated with the group on several occasions together with Paco Peña has been quoted as saying, Inti-Illimani is one of the greatest musical groups of our time.  In 1973, the coup d'état orchestrated by General Augusto Pinochet, which occurred during a European tour, placed them in a position of exile for the next fifteen years, and their music became officially banned by the dictatorship of Chile.  But from a European base, the group went on to forge a formidable career, which has given them much critical acclaim and bestowed upon them the admiration and respect of fans and musicians from around the world.  The nucleus of the band features Jorge Ball, Daniel Cantillana, Jorge Coulon, Marcelo Coulon, Horacio Durán, Horacio Salinas, Efren Viera and Pedro Villagra on a collection of more than thirty wind, string and percussion instruments, representative of European, indigenous, African and mestizo cultures.  Amar de Nuevo is their latest release and represents the 30th album of their celebrated 32-year history.

What are the roots of Inti-Illimani?

JC: In 1967, we were students at La Universidad Técnica de Santiago, so our cultural background is that, as university students.  And in that technical university, the studies were very active, in the sense of arts and culture, so our university was highly culturally active.  I personally participated at that time in a theatre group, and we were interested in music, in literature.  And musically we fell in love with the sounds of Andean music, it was so exciting for us at that time.  Also, we have this music alive in the north of the country. But for students at that time, we only had bad American music on the radio (chuckles).  And we discovered the sound of the panpipes, the charango and all these instruments, and we fell in love, a really passionate love.  And we began to play at the university in the beginning, but then we went to Bolivia, Peru, Argentina and all over Latin America.  And these are the musical roots of our group.

How do you reflect today on the period in the 70s, and the political turmoil of Pinochets Chile that would place the band in a position of exile for the next 14 years?

JC: Well, when we started the group, at the end of the sixties, the atmosphere in Chile was very politicized, there was a lot of social unrest, and this was happening not only in Chile, but over the world.  And before 68 also, because in Chile there was a big popular movement, the unions and the working class were so organized.  And this period has a coincidence with the 68 phenomenon, which was more about the young people at the universities.  And we started the group in this atmosphere, but at the beginning we were actually a little bit in an another world, we were in love with flutes, so in some ways we were more hippies than political.  But the atmosphere was so strong and we were in the most politicized university of Chile, because it was the technical university.  In 1967 we had elections to choose the rector or dean of the university, and ended up with a communist dean.  In this climate it was natural for us to support La Unidad Popular, the centre left government, it was a natural choice.  We began our third European tour, and so we were in Italy when the coup happened in Chile, and we were banned from going back home.  And we ask ourselves many times about it, because we always say that we are a musical group (chuckles), because many times people say that its political songs.  Yes its true, we participate, and today we do have precise political opinions, and participate as citizens in the political life of our country.  But were a musical group, and the principal interest in the group has never been to do with publicity or propaganda but with our music.

Where you ever given a reason for being forbidden to return to Chile?

JC: This is a good question that you can go to London to research (laughs).  But there was a sort of paranoia in the military government with respect to all musical activities.  And not only musical, because I think ninety or ninety-five percent of artists, painters, writers, dancers and musicians supported Salvador Allendes government, because it was a concrete possibility to change the situation in Chile, the situation of inequality, and the situation of extreme poverty in our country.  And it was in a democratic way that we voted and elected Allende in free elections, and most people, intellectuals and artists supported Allende.  And I think they saw a phantom, a ghost (chuckles) in everything that has to do with culture.  In the very first weeks of the military government they banned the instruments.  It was crazy, it was incredible!  And our group, another group Quilapayún and Victor Jara were the most representative groups of the New Chilean Song Movement.  And Quilapayún and our group were on tour, Quilapayún was in France at the time, and we were in Italy on the day of the coup.  And the first thing that they did was to ban the instruments and our groups from the radio, and we were forbidden to return to Chile.  And that day they killed Victor Jara in the Chile soccer stadium.  But I think it was a paranoia with culture.  You know, the Spanish fascist leader Franco once said that when he would hear the word culture he would make a move for the gun.  So its a long tradition in military mentality.

What is the source of inspiration for the bands repertoire?

JC: We are a group in the movement, but each group or artist has their own soul.  Our certain inspiration was Indian music, the music of the Andes especially, but we began as an instrumental group, we didnt sing at the beginning.  And we were seduced by sounds, this was the first inspiration, and then we began to be inspired by popular songs and also by the social situation.  Well, I dont know if you know, but Chile is a country with plenty of poetry and poets, we have good poets here, we have two Nobel Prizes in poetry, and so its not difficult to find wonderful lyrics for songs here.  And we have worked in the past and still do today with many Latin American, Chilean poets.  Especially in the last twenty years, we have been working with Patricio Manns, hes a writer and also writes songs, so we work with him on the lyrics.

How would you describe the use of traditional and non-traditional instrumentation?

JC: When we began to play, there was in Chile, and we discovered after that that the discussion was all around the world, the same discussion about the purity of folk music, and the purity of the use of native instruments.  And from the beginning we wanted to be really free in this way, because for us, the only limit that we put on this is that we only use acoustic instruments.  We dont blend with electric bass or keyboards, and sometimes some people can do this in a good way, but there is something different in the soul of the instruments that is difficult to blend.  And we use the instruments of the Andean tradition, like panpipes and quenas, which are the traditional flutes.  We also use the charango, which is an instrument born in Bolivia after the Spanish settlement, because its a blend, a sort of mandolin, but its made with the shell of an armadillo.  And the scale is a pentatonic scale.  Its a typical criollo, a mixture between Spanish and Indian culture.  And we try to use these sounds in a new way, and the new things that we do is blend these kinds of instruments, and instruments from Bolivia, Colombia, Mexico and so on.  Our bass is a Mexican bass, and we use a tiple, which comes from Colombia.  Its a wonderful guitar with steel strings, and it has a sound similar to a harpsichord.  And we blend this with a cuatro from Venezuela.  So just like a painter, we began blending sounds and looking for different matices or shades of colours.  And looking for different songs, to play a love song from Ecuador for instance, a song like Dolencias, which is a very sad and romantic song, we try to use the instruments that can best express these feelings.  In another kind of arrangement we play a little bit with the sounds, looking to blend lively percussion instruments with instruments like quena or panpipes, which have a more melancholy sound.

Tell me about Inti-Illimani the political and social activist.  For the Amnesty cause you performed together with Bruce Springsteen, Mercedes Sosa, Sting, Wynton Marsalis and Peter Gabriel, and in Chile you have now established the Victor Jara Foundation.  Is this an important aspect of Inti-Illimani?

JC: Yes, in Latin America, in general, artists, poets and writers must do many things, because we have no great philosophers or historians, so we have play a part in that.  We learn in Europe and in English speaking countries that there is big activity at universities of people who are thinking and discussing life and politics.  We have less thinking people, and maybe because we have less money to finance all the people thinking (chuckles).  So part of this activity in Latin America is done by musicians, poets and artists, and its very important because the people are waiting for you to do something in this way.  We do have people working in professional politics, but they look after their own interests.  The position of the artist who is engaged in politics is more general, its not his own personal interest that he looks out for, its more a social interest.  And the people here ask the artist to have a position in this way, people are always asking us not only our opinion but to participate in social activities.

Do you have a vision for the future of Latin American folk music?

JC: Its a strange situation in Latin America, because we have an incredible richness in sounds and rhythms.  And weve been playing together for thirty-two years, and we still have projects with Latin American music for the next fifteen years (chuckles).  But the media here is always looking after show business, and so on the radio and television we dont have our own music, we have the big multinational music.  But its curious, because everywhere, especially now in Europe and in the United States, the big rock stars are looking to Latin American music (laughs), or African music.  And we began to discover our own music because Peter Gabriel discovered Latin American music.  Its a strange circle, but I think we have an enormous future because we have an enormous richness, and I think in some ways the big musical enterprises in the world, the big multinationals need new sap, and we have that.  For us its important to be in connection with our roots, but to also live open to the world.  Its because we are open to work with other people, we work with Peter Gabriel, Paco Peña, John Williams, and we also work with orchestras in Canada, the United States and Italy.  So we want to be Latin American, but with our windows open.

Amar de Nuevo out on Xenophile.  For further information on Inti-Illimani visit the Gami/Simonds Web Site, or the Official Chilean Inti-Illimani Home Page